The Soviet synthesizer RITM-2 was created in 1982 by Viktor Anatolyevich Nikulin, an engineer at the Kirov Plant of Musical Instruments, at the request of his friend, a musician. The management of the company liked the device and in 1984 its serial production began, which lasted 10 years. During this time, the instrument scheme has undergone further improvements three times. It was the only Soviet synthesizer, all components and controls which were placed on a single printed circuit board. Functionally, it consisted of one tone generator, a noise generator, a sound mixer (triangle, saw, rectangle, noise), a low-pass filter, two full-format envelope generators (attack, recession, support, after-sound) and a low-frequency modulation generator. Structurally, it was a portable keyboard instrument weighing about 15kg, in a plywood case with a lid. The front panel had two versions: black and white. The main feature of the instrument, which determined its character, long life and fame in a professional environment, was its uniquely rigid sound. The production capabilities of the enterprise were very modest and for the entire 10-year period only about three thousand tools were released. RHYTHM-2 was produced exclusively on orders from the administrations of houses and palaces of culture, the enterprises of the foremost communist labor, which had their own musical groups. In the Soviet period, it was impossible to purchase a rare instrument on free sale and among musicians who had no relation to amateur groups, RHYTHM-2 was little known. They learned about the unusual synthesizer only after 1993, when the amateur music supported by the Soviet authorities, together with the palaces of culture and the Soviet authorities themselves, ceased to exist and the RHYTHM-2 synthesizers began to fall into the hands of professional musicians in Russia and abroad. 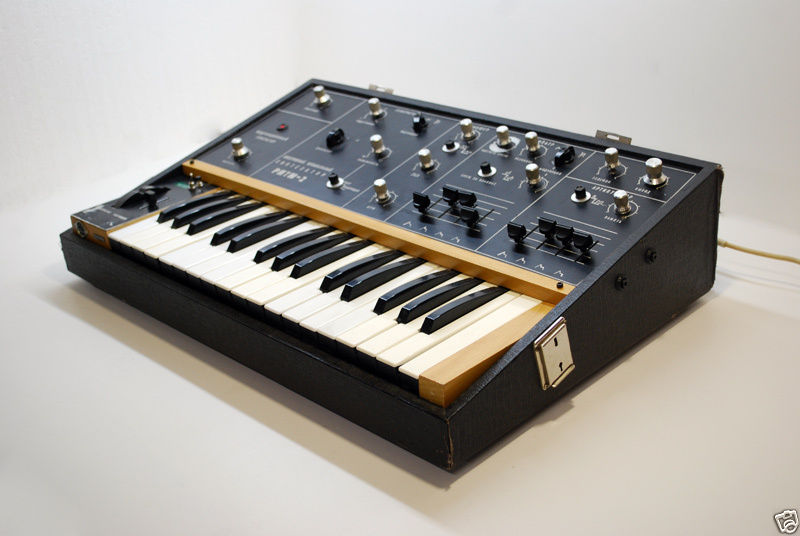 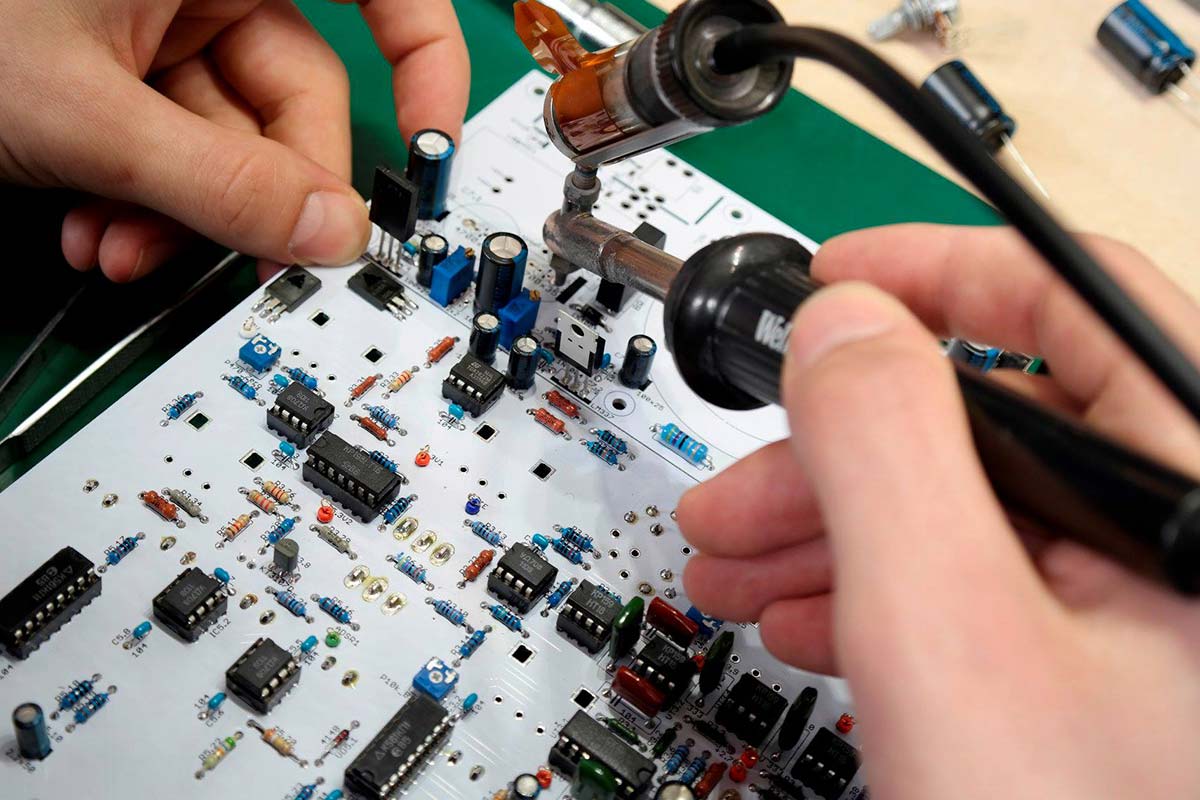 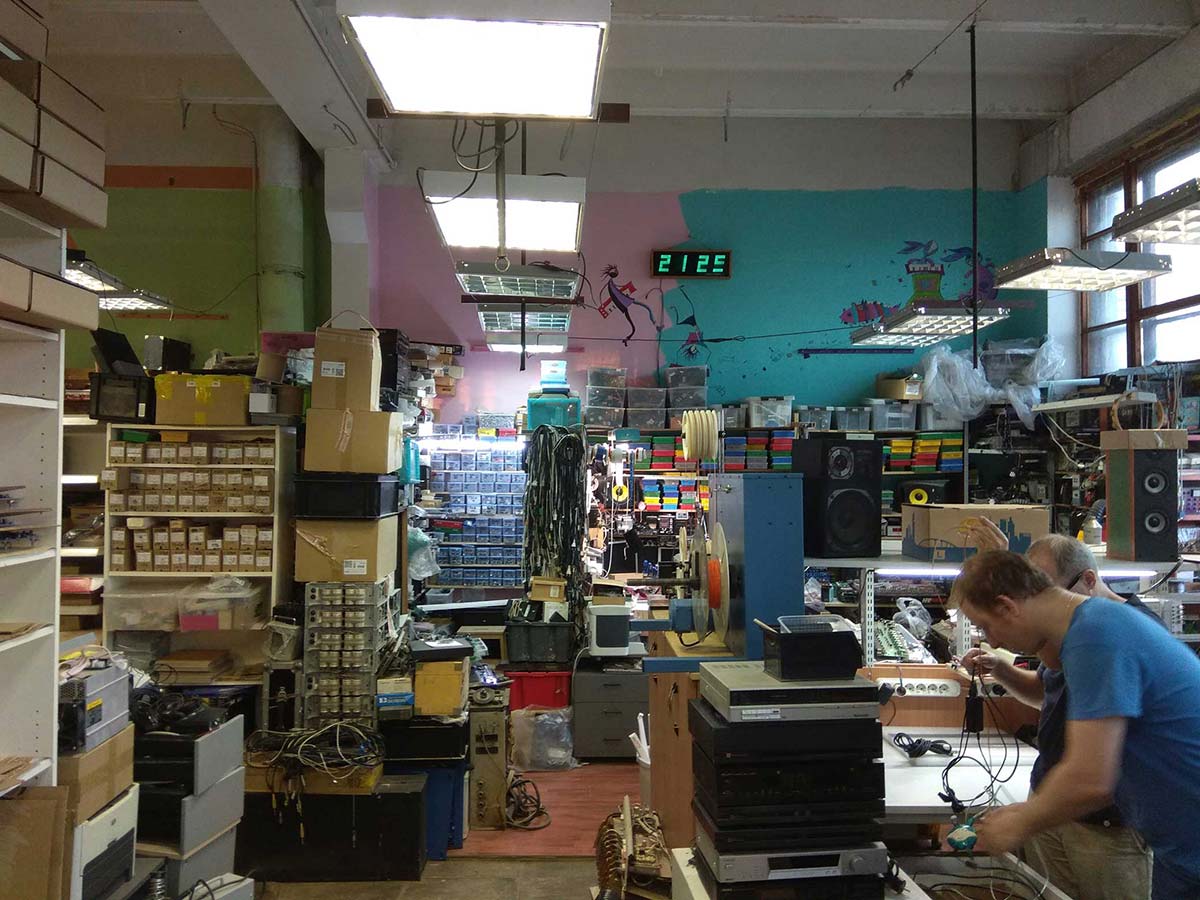 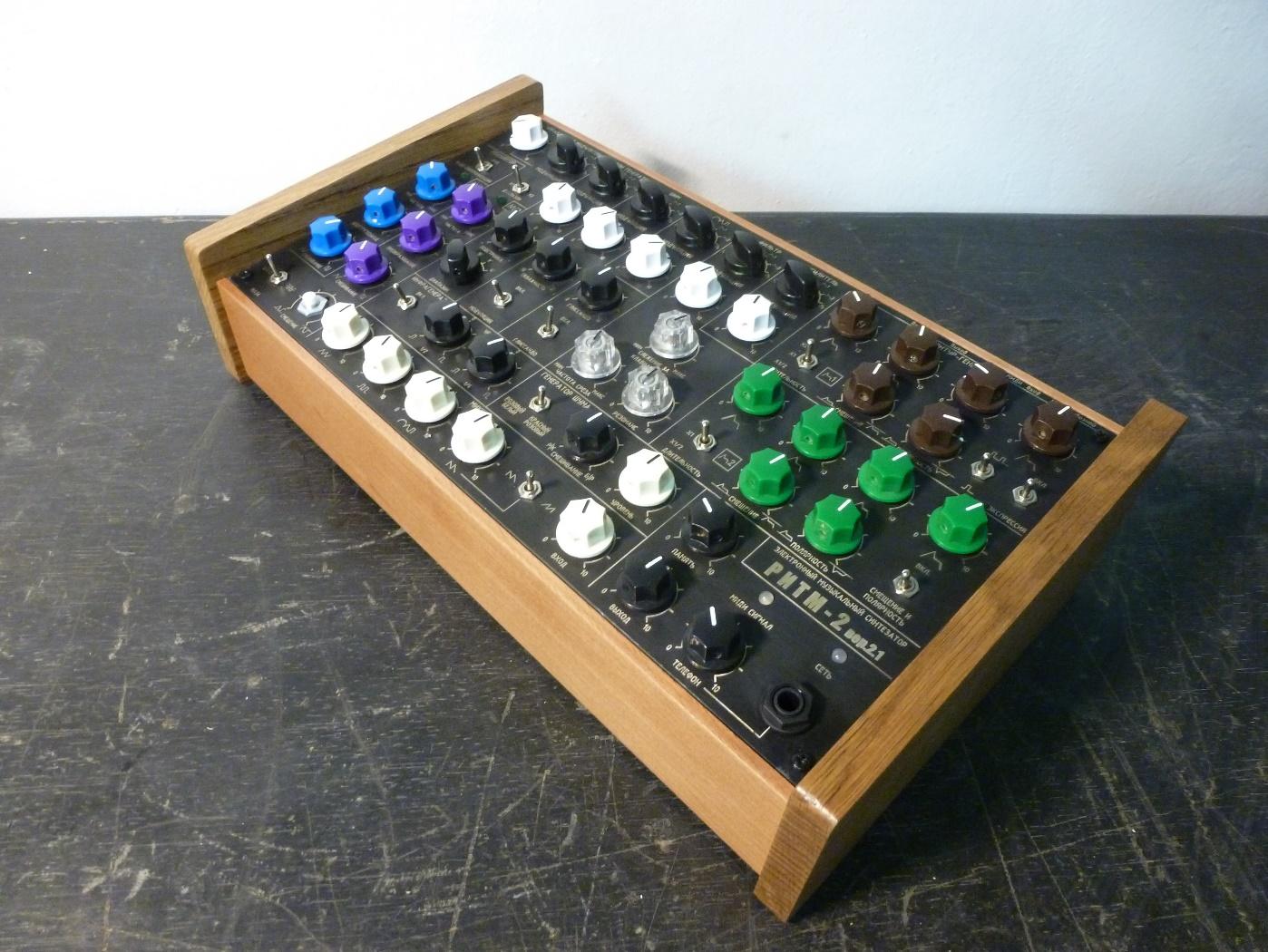 The idea to bring to the market an updated version of the rare and undeservedly forgotten Soviet synthesizer RHYTHM-2 first appeared in the fall of 2015, in a conversation with Vyacheslav Grigoriev and Grigory Ryazanov — two radio engineers who had different experiences at the time, but equally passionate about electronic music. At that moment, Vyacheslav groped for a new direction of development for his, for many years, existing business of repairing and customizing electronic musical instruments. Gregory, who worked as a design engineer for railways, wanted to agree on consulting support for his dream of having a custom improved RHYTHM-2. As the saying goes, “engineers suffered”, as a result, they decided to open a little known before RHYTHM-2 to the whole world, having developed and brought to the market a replica of the Soviet RHYTHM-2, which would have all its advantages, but was devoid of flaws.

The replica is always difficult — everyone knows that well from the experience of the movies: you can always say that the followers did not catch the spirit, distorted the meaning, vulgarized the original idea, etc. It was for this reason that a telephone conversation with the original author of the original RHYTHM-2, Viktor Nikulin, gave «good» to this project, the words «why not?». The main task of the developers was to preserve the unique sound. It was solved only with the help of Soviet microcircuits, which were almost unreal to buy by this time. No less important tasks were the design (I wanted to give it freshness, but there were fears that the tool would lose authenticity) and functionality (I wanted to improve a lot, but the doubts were the same).
Immediately, at the idea stage, the developers decided to abandon the keyboard in favor of an external or emulated computer. Then began a period of rapid technical creativity, aimed at expanding the functional and cardinal revision of circuit solutions.

Subsequently, this synthesizer was demonstrated at the Art-Aura-2017 Festival (Moscow), the 2017 Synthesis Stage under the name RHYTHM-2 ver 2.1. The sound was interesting, but quite unique, not RHYTHM. In addition, the device turned out very complicated and low-tech. Estimated cost and it became clear that it is too high. Thus, this version of the new RHYTHM-2 could not be released in the series, and therefore risked to beat the original in its rarity and obscurity among musicians. This meant that the mission of the RHYTHM-2 project would not be fulfilled.

The flight of engineering thought should be subordinated to a clearly defined goal — as a result, finally, the concept of a new instrument was formulated and the task was clarified: to delicately reproduce the Soviet instrument, retaining its sound and application features. To inscribe it in a new musical culture of the 21st century, not as a museum piece, but as a unique, but quite marketable product with an interesting background. As a result, despite the fact that the “inner circle” of musicians and collectors perceived RHYTHM-2 ver 2.1 very well, a difficult decision was made to refuse to launch it in the series. Five prototypes of RHYTHM-2 ver 2.1 got into Russian studios and to collectors, and the work on the RHYTM-2 project was subject to the rules of ordinary innovation activity. As a result, in early 2018, the RHYTHM-2 was introduced to the market, which is already familiar to everyone. 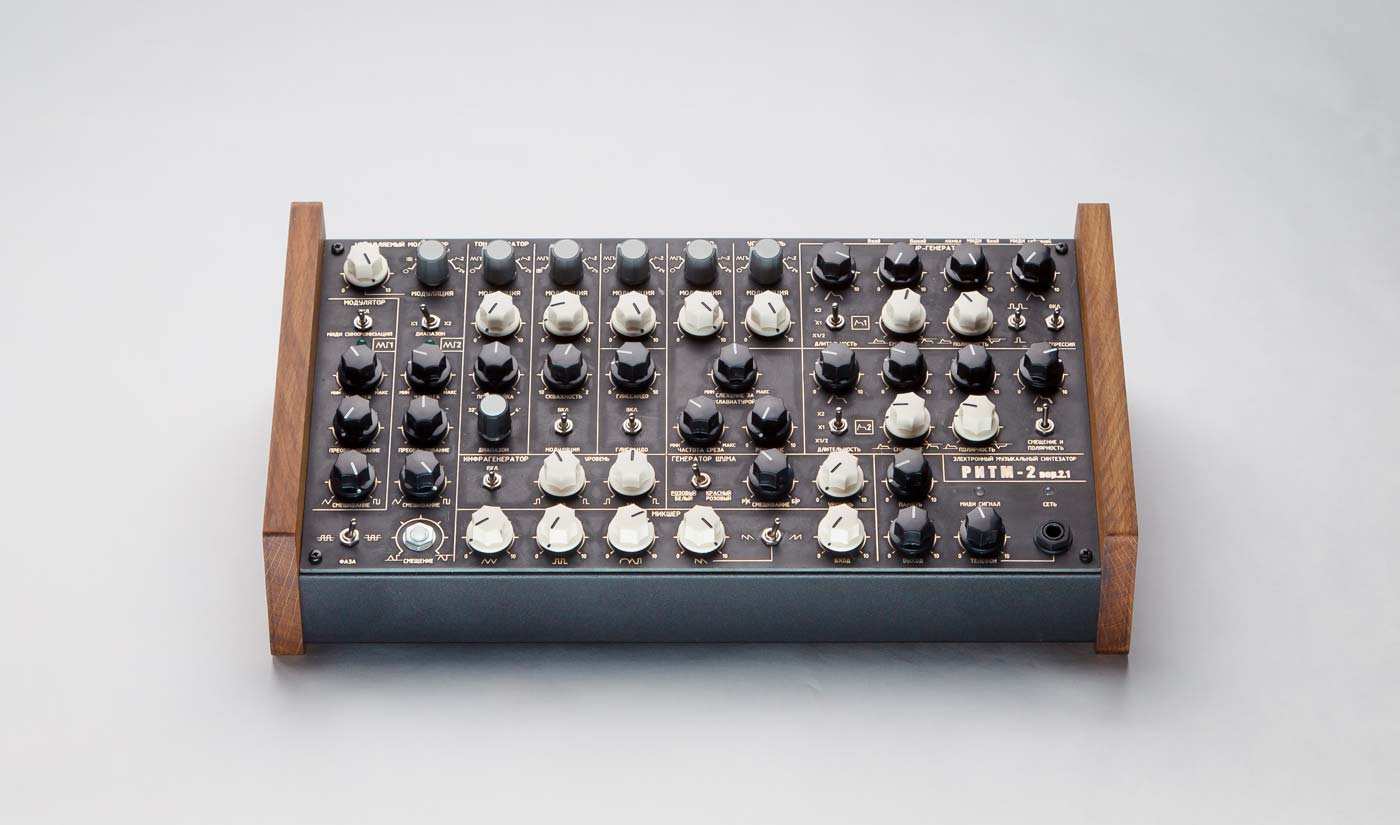 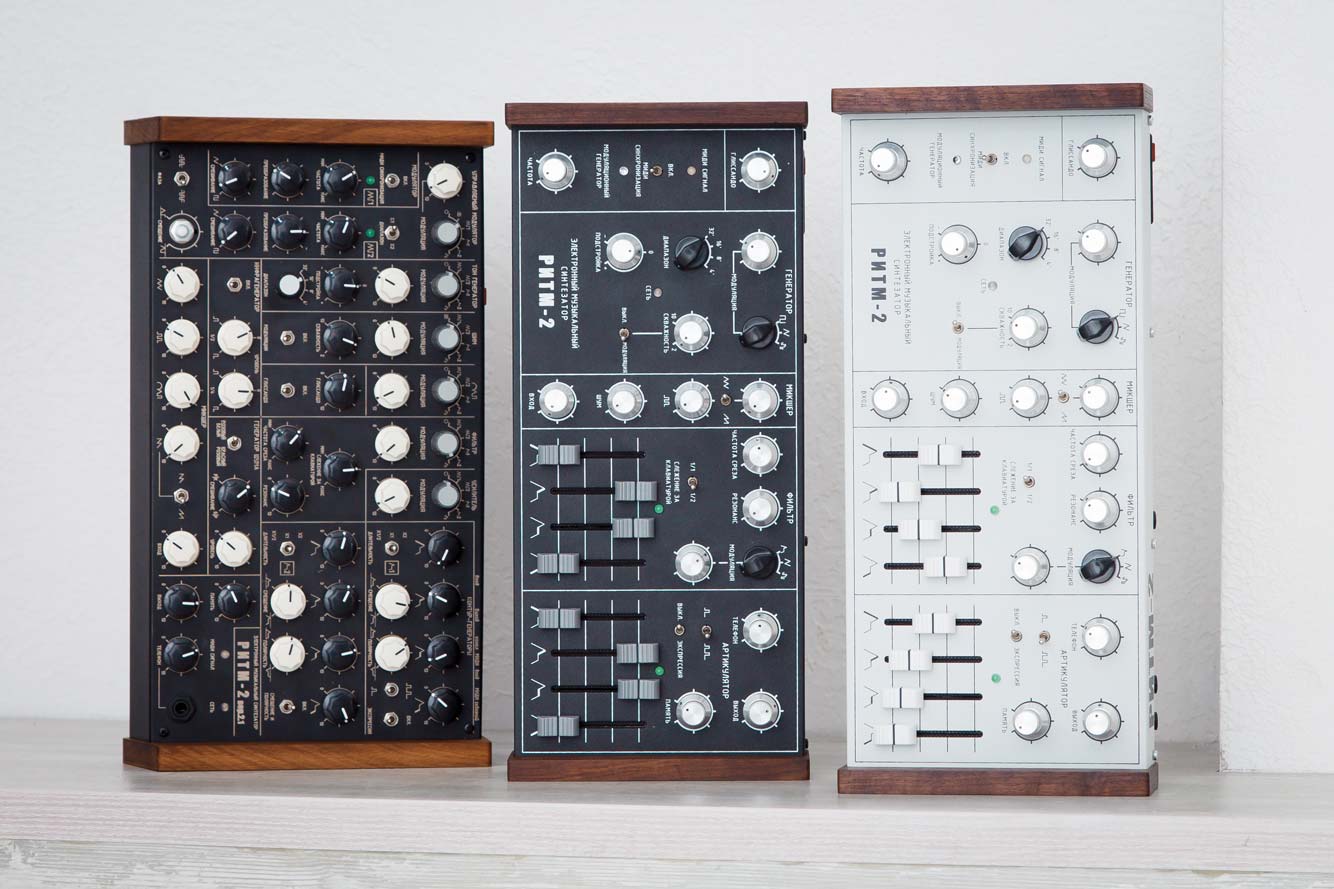 The lack of a keyboard.

MIDI interface availability. With the current situation in the market of electronic musical instruments, the keyboard of analog synthesizers becomes an atavism due to the specifics of the musical genres in which these synthesizers are used. As a rule, the parts are reproduced according to the MIDI protocol from software and hardware sequencers and represent repetitive rhythmic structures that the performer cannot physically play throughout the composition, since Often, during the performance, he manages several more such devices. The new version of «RHYTHM-2» has a MIDI interface that allows you to control the synthesizer using any modern MIDI controller, MIDI sequencer, or simply a personal computer. And the lack of a keyboard and compact dimensions facilitate transportation and save space in your setup!

External input. An additional input allows you to pass any electro-musical instrument through the filter unit and articulator and mix its sound with the sound signal of the generator, thereby expanding the range of sound and the possibility of using the RHYTHM-2 synthesizer.

Extra indication. The “NETWORK” indicator is added, which allows you to be 100% sure that the synthesizer is either turned on or off (on the previous model, this role was played by the modulation generator indicator, which at the minimum position of the FREQUENCY knob flickered with a frequency of ~ 0.5 Hz which was very impractical). LED indicators for starting envelope generators have been added, which allows you to visually monitor their work in cases where it is impossible to do this by ear. Also appeared tricolor indicator MIDI signals.

The new RITM-2 is produced in Moscow in batches of 30-50 products. The price of the synthesizer is 690 euro or $790 plus the cost of delivery if you are not in Moscow. To buy RHYTHM-2, you need to send an email to info@ritm2.su — in return, you will receive an invoice for payment. At the moment, payment can be made through PayPal, Payoneer and a direct transfer to a bank account in the Russian Alfa Bank in euros or dollars.

For delivery of RHYTHM-2 in Russia and around the world, we use the EMS service. Shipping cost is 20-60 euros. Sending synthesizer to the address you specified. produced within 15 working days from the date of receipt of payment from the buyer.

If it suddenly turns out that it does not fit into your installation or does not meet your expectations, but at the same time has the appearance of a new device, is fully operational and complete, there is the possibility of returning the synthesizer.

The warranty period for RITM-2 is 2 years.